I’m trying to understand the three magic LoRaWAN IDs from the?LoRaWAN 1.2 specification. My understanding is:

Now I’m having problem understanding?who?is responsible for creating these IDs:

The DevEUI is an ID in the IEEE EUI64 address space used to identify a device. It is supplied by the device manufacturer. A deprecated algorithm exists to convert 48bit MAC addresses to EUI64. For MAC addresses with 6 bytes (e.g. 01 02 03 04 05 06) put ff fe or ff fe in the middle (e.g. 01 02 03 ff fe 04 05 06). This algorithm has been deprecated as it may lead to?collisions?with other DevEUIs. During over the air activation a DevAddr is assigned to the device. This DevAddr is used in the LoRaWAN protocol afterwards. The DevEUI is sent unencrypted.

The JoinEUI (formerly called AppEUI) is a global application ID in the IEEE EUI64 address space identifying the join server during the over the air activation. For non-private networks it corresponds to a subdomain of joineuis.lora-alliance.org. This server name is used to find the IP address of the join server via DNS. This is described in?LoRaWAN? Back-End Interfaces v1.0.

AppKey is the encryption key used for messages during every over the air activation. After the activation the AppSKey is used. A listener knowing the AppKey can derive the AppSKey. So you want to keep the AppKey secret. Which side of the communication channel creates it is not important. You simply want to be sure that it is random.

The user can derive their own DevEUI

The?AppKey?is an?AES128?root key specific to the end device. Whenever an end device joins a network via over the air activation(OAT), the?AppKey?is used to derive the session keys?NwkSKeyand?AppSKey?specific for that end device to encrypt and verify network communication and application data.

The AppKey should be unique for each device.The user can derive their own AppKey

The?AppEUI?is a global application ID in IEEE EUI64 address space that uniquely identifies the entity able to process the JoinReq frame. The?AppEUI?is stored in the end-device before the activation procedure is executed

The AppEUI can be different for each device or it can also be same for all device. It also depends on what kind of application server you are using.
For example in?loraserver.io?you can have unique AppKey,AppEUI and DevEUI but in?TheThingsNetwork?you can register many devices for one application or AppEUI. But note that AppKey and DevEUI should always be unique for each end node. 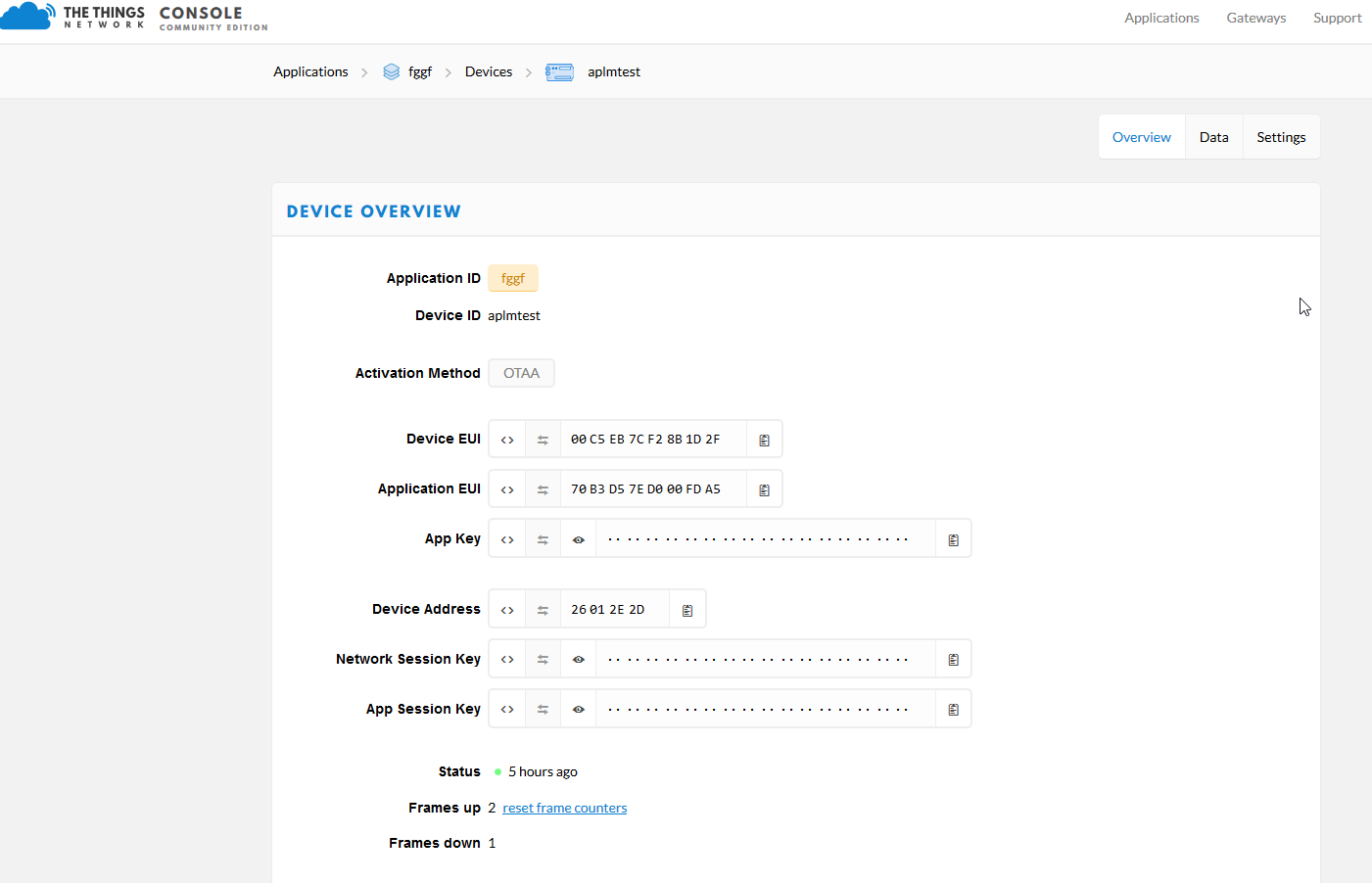 This post describes what DevEUI, AppEUI (JoinEUI) and AppKey are, using online sources and the relevant sections for the LoRaWAN? Specification v1.1 and v1.0.3

This is the unique ID of the end device. To make sure it is unique, the node manufacturer should contact the IEEE to obtain a range of unique addresses.

How to get them:

(1) DevEUI: this key is linked to the end node, this means end node manufacturers should contact the IEEE to get a range of unique identifiers.

The (1) DevEUI is a global end-device ID in IEEE (2) EUI64 address space that uniquely identifies the end-device.

DevEUI is the recommended unique device identifier by Network Server(s), whatever activation procedure is used, to identify a device roaming across networks.

Note: It is a recommended practice that the DevEUI should also be available on a device label, for device administration.

The message integrity code (MIC) value (see Chapter 4 for MAC message description) for a (9) join-request message is calculated as follows:

The (9) join-request message is not encrypted. (9) The join-request message can be transmitted using any data rate and following a random frequency hopping sequence across the specified join channels. It is RECOMMENDED to use a plurality of data rates. The intervals between transmissions of (9) Join-Requests SHALL respect the condition described in chapter 7 (a random retry). For each transmission of a Join-request, the end-device SHALL increment the (21) DevNonce value.

LoRaWAN networks typically are laid out in a star-of-stars topology in which (12) gateways relay messages between (13) end-devices and a central (6) Network Server. The (6) Network Server routes the packets from each device of the network to the associated (14) Application Server.

The (15) Network Session consists of the following state:

The (16) Application Session consists of the following state:

The (19) AppEUI is a global application ID in IEEE EUI64 address space that uniquely identifies the entity able to process the JoinReq frame.

The (19) AppEUI is stored in the end-device before the activation procedure is executed.

The (2) JoinEUI is a global application ID in IEEE EUI64 address space that uniquely identifies the Join Server that is able to assist in the processing of the Join procedure and the session keys derivation.

For OTAA devices, the JoinEUI MUST be stored in the end-device before the (5) Join procedure is executed. The (20) JoinEUI is not required for ABP only end-devices

The (22) NwkSKey is a network session key specific for the end-device. It is used by both the network server and the end-device to calculate and verify the (24) MIC (message integrity code) of all data messages to ensure data integrity. It is further used to encrypt and decrypt the payload field of a (25) MAC-only data messages.

The message integrity code (MIC) is calculated over all the fields in the message.

whereby the block B0 is defined as follows:

The direction field (Dir) is 0 for uplink frames and 1 for downlink frames.

The MAC header specifies the message type ( (30) MType ) and according to which major version ( (32) Major ) of the frame format of the LoRaWAN layer specification the frame has been encoded.

The (33) DevAddr consists of 32 bits identifies the end-device within the current network. Its format is as follows:

The most significant 7 bits are used as network identifier ((44) NwkID) to separate addresses of territorially overlapping networks of different network operators and to remedy roaming issues. The least significant 25 bits, the network address ((45) NwkAddr) of the end-device, can be arbitrarily assigned by the network manager.

For downlink frames the (34) FCtrl content of the frame header is:

For uplink frames the (34) FCtrl content of the frame header is:

uplink to the network server (FCntUp), incremented by the end-device and received by the

end-device downlink from the network server (FCntDown), which is incremented by the

reset for a personalized end-device, the frame counters on the end-device and the frame

counters on the network server for that end-device are reset to 0. Subsequently FCntUp and

respective direction. At the receiver side, the corresponding counter is kept in sync with the

value received provided the value received has incremented compared to the current counter value and is less than the value specified by MAX_FCNT_GAP1 after considering counter rollovers. If this difference is greater than the value of MAX_FCNT_GAP then too many data frames have been lost then subsequent will be discarded. The FCnt is not incremented in case of multiple transmissions of an unconfirmed frame (see NbTrans parameter), or in the case of a confirmed frame that is not acknowledged.

The LoRaWAN allows the use of either 16-bits or 32-bits frame counters. The network side

The frame-options length field (FOptsLen) in FCtrl byte denotes the actual length of the frame options field (FOpts) included in the frame.

FOpts transport MAC commands of a maximum length of 15 octets that are piggybacked onto data frames; see Chapter 5 for a list of valid MAC commands

MAC commands cannot be simultaneously present in the payload field and the frame options field. Should this occur, the device SHALL ignore the frame.

LoRa network allows the end-devices to individually use any of the possible data rates. This feature is used by the LoRaWAN to adapt and optimize the data rate of static end-devices. This is referred to as Adaptive Data Rate (ADR) and when this is enabled the network will be optimized to use the fastest data rate possible.

Adaptive Data Rate control may not be possible when the radio channel attenuation changes fast and constantly. When the network is unable to control the data rate of a device, the device’s application layer should control it. It is recommended to use a variety of different data rates in this case. The application layer should always try to minimize the aggregated air time used given the network conditions.

Note: Even mobile end-devices are actually immobile most of the time. So depending on its state of mobility, an end-device can request the network to optimize its data rate using ADR.

If an end-device whose data rate is optimized by the network to use a data rate higher than its lowest available data rate, it periodically needs to validate that the network still receives the uplink frames. Each time the uplink frame counter is incremented (for each new uplink, repeated transmissions do not increase the counter), the device increments an ADR_ACK_CNT counter. After ADR_ACK_LIMIT uplinks (ADR_ACK_CNT >= ADR_ACK_LIMIT) without any downlink response, it sets the ADR acknowledgment request bit (ADRACKReq). The network is required to respond with a downlink frame within the next ADR_ACK_DELAY frames, any received downlink frame following an uplink frame resets the ADR_ACK_CNT counter. The downlink ACK bit does not need to be set as any response during the receive slot of the end-device indicates that the gateway has still received the uplinks from this device. If no reply is received within the next ADR_ACK_DELAY uplinks (i.e., after a total of ADR_ACK_LIMIT + ADR_ACK_DELAY), the end-device MAY try to regain connectivity by switching to the next lower data rate that provides a longer radio range. The end-device will further lower its data rate step by step every time ADR_ACK_DELAY is reached. The ADRACKReq SHALL not be set if the device uses its lowest available data rate because in that case no action can be taken to improve the link range.

Note: Not requesting an immediate response to an ADR acknowledgement request provides flexibility to the network to optimally schedule its downlinks.

Note: In uplink transmissions the ADRACKReq bit is set if ADR_ACK_CNT >= ADR_ACK_LIMIT and the current data-rate is greater than the device defined minimum data rate, it is cleared in other conditions.

Acknowledgements are only sent in response to the latest message received and are never retransmitted.

The frame pending bit ((40) FPending) is only used in downlink communication, indicating that the gateway has more data pending to be sent and therefore asking the end-device to open another receive window as soon as possible by sending another uplink message.

N is the number of octets of the application payload. The valid range for N is region specific and is defined in the “LoRaWAN regional physical layer specification” document.

N should be equal or smaller than:

where M is the maximum MAC payload length.

If a data frame carries a payload, FRMPayload MUST be encrypted before the message integrity code (MIC) is calculated.

The key K used depends on the FPort of the data message:

The fields encrypted are:

The direction field (Dir) is 0 for uplink frames and 1 for downlink frames.

The blocks Ai are encrypted to get a sequence S of blocks Si:

Encryption and decryption of the payload is done by truncating

to the first len(pld) octets.

Note: The Major version specifies the format of the messages exchanged in the join procedure (see Chapter 6.2) and the first four bytes of the MAC Payload as described in Chapter 4. For each major version, end-devices may implement different minor versions of the frame format. The minor version used by an end-device must be made known to the network server beforehand using out of band messages (e.g., as part of the device personalization information).

What is an Adaptive Data Rate?LoRaWAN地区参数-CN470